For my seminar „Games, Play and Education“ I’ve scraped together (via skinning, modding, recontextualisation) three minigames. These should serve as an intro to the three learning paradigms of Behaviourism, Cognitivism and Constructivism and their possible realisation in games via their very different gaming mechanisms.

The 32 cards and the rules can be downloaded as printable PDF (three pages) via this link: ThreeLearningTheoriesMinigames. 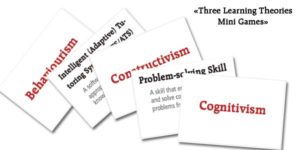 Scalability:
Due to division in small groups of four students all games are scalable to any reasonable seminar size, i.e. 8-24 students.

Duration:
Estimate for four groups (à 2-6 players) is about 45 minutes

Precondition:
20 paper strips per group, a stop watch or something similar per group, and at least a rudimentary knowledge about the three learning paradigms.

Overall didactic goal:
Discerning learning paradigms represented in the rule system of different games, discovering that knowledge about categorisation, definition and connectability can itself be a playing material.

32 strips of paper with learning theory terms and proponents from the ‚big three‘ learning paradigms, stopwatch.

Setup: Groups with an equal number of players with one
set of concept-cards for each group.

Didactic goal: Behaviouristic limitations – ambivalent or
negotiable objects can not be assigned in a game of clear cut
categorisation.

Setup: Groups with an equal number of players (3-5) with
one set of concept-cards per group. Stopwatch or something
similar to measure minutes.

Didactic goal: Cognitivistic multiperspectivity – Though
the term itself may be rather clear, there are many ways to
describe it.

Setup: Groups with an equal number of players with one set
of concept-cards for each group. Stopwatch or something
similar to measure minutes.

Didactic goal: Constructivistic creative connections – The
relationsship between two (disparate) objects is not a given
to be discovered or learned, but can be subjective, creative
and object of negotiation.