As impressive as most commercial games look like, ’new‘ games rely mostly on skinning (signs and stories), slight modding (rule systems), recombination and maybe some additional extras – to already known and successful games and game mechanics.

This is game design from the ‚outside‘, using unchanged off-the-shelf commercial games like „civilization“ or quiz games put into an educational setting. The game itself may be scrutinized for the reliability of the information delievered, used as a motivational ‚opener‘ to the topic, or to teach principles not directly related to the game’s overt theme like systemics, collaborative or recherche skills etc. (See e.g. Puentedura’s text about the repurposing of commercial games for education or Jenkins‘ and Squire’s text on the use of ‚Civilization III‘) Dedicated educational games may have a similar approach created beforehand, e.g. for GameLab’s „Ayiti: The Cost of Life“, where there’s a lesson plan available.

This is the stripping of some or all of a game’s visuals and audio, i.e. it’s narrative elements and base metaphors, until the game’s core mechanic is left. New elements will then be used as new ’skin‘ to adapt the appearence, appeal and narrative context of actions to a specific objective and audience. For example the chinese Man-Rooster-Worm was skinned and turned into the well known, maybe less offensive Rock-Paper-Scissors-game. Best known online examples are probably the numerous variants of the shooting-gallery-kind, like „Moorhuhn“, a simple ’shoot’em up‘ game where you have to aim and shoot at moving targets. 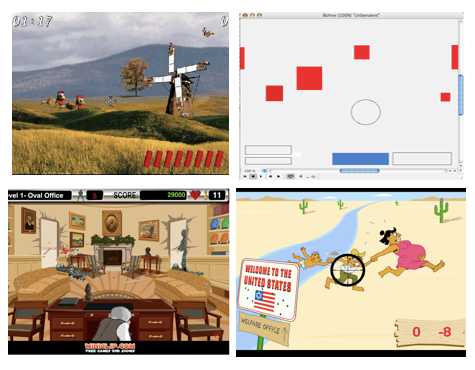 Some examples for games which are easily skinned and refittable for educational purposes:

This is the modification of rules, the ‚moving‘ of a known rule system through its rulespace. Rules may be modified e.g. for a different numbers of players (e.g. a class of pupils), shorter playing time (e.g. 45 minutes), collaborative play (e.g. class against the teacher), different rules for moves (e.g. that before every move the player has to answer a quiz question) or in a host of other ways complementing the educational content of the game. Furthermore games may thus be adapted to certain situations or to support a certain learning objective in skill or attitude requirements. This is one of the most common ‚evolutionary‘ ways new games are developed.

„A new card game starts in a small way, either as someone’s invention, or as a modification of an existing game. Those playing it may agree to change the rules as they wish. The rules that they agree on become the „house rules“ under which they play the game. A set of house rules may be accepted as valid by a group of players wherever they play. It may also be accepted as governing all play within a particular house, café, or club.
(…) When a game becomes sufficiently popular, so that people often play it with strangers, there is a need for a generally accepted set of rules. This need is often met when a particular set of house rules becomes generally recognised. For example, when Whist became popular in 18th-century England, players in the Portland Club agreed on a set of house rules for use on its premises. Players in some other clubs then agreed to follow the „Portland Club“ rules, rather than go to the trouble of codifying and printing their own sets of rules. The Portland Club rules eventually became generally accepted throughout England and Western cultures.“
– Quote from Wikipedia article „Card Games“ (20.03.2009)

Some general principles of gameplay are depicted here: 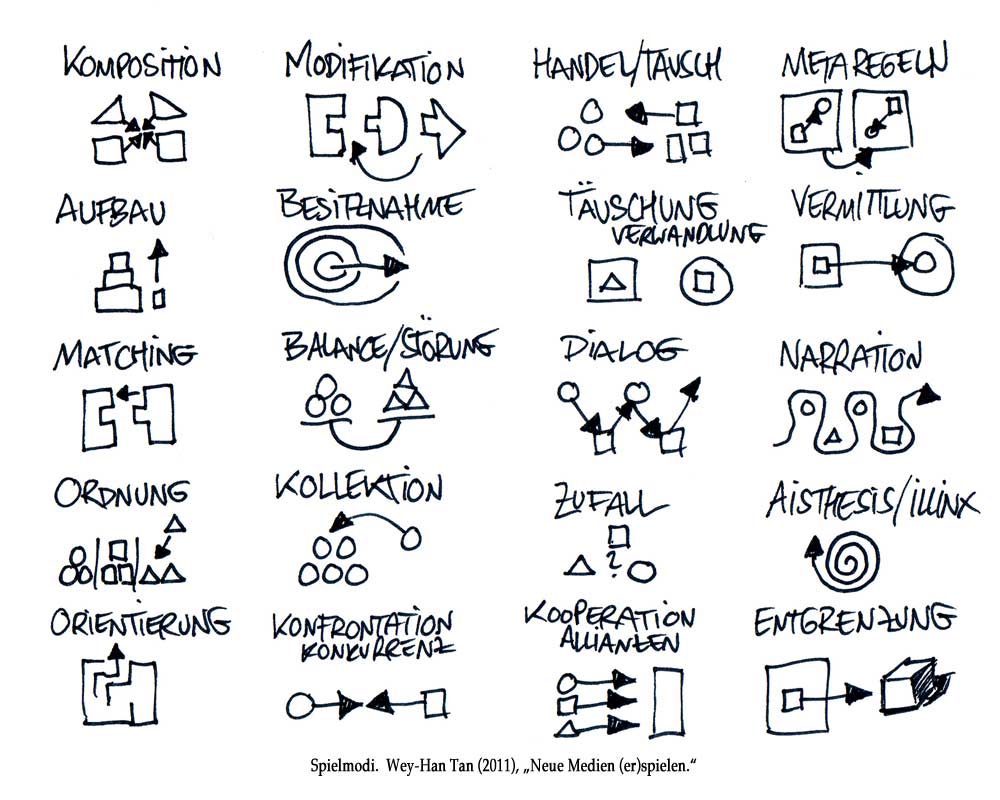 Add-Ons are little extras added to an existing, already functioning game, like extra event-cards in Monopoly, or an expansion set of quiz cards in „Trivial Pursuit“. Add-Ons are somewhere positioned between modding and systemic accretion: They expand the possibilities of the game, but strive not for a rule change, change of narrative context or systemic emergent gameplay.

One of the best known examples of ‚educative‘ Add-Ons in the last years – due to the extensive media coverage – probably was the US military’s „Most Wanted“ deck of cards in the aftermath of the Iraq war.

The expansion of the well-known Rock-Paper-Scissors-game is also easy to do, though here the add-on may wander into the territory of accretion, since the complexity of the possible interactions increases: For example in a variation called Robot-Ninja-Zombies-Pirates-Monkeys.

A powerful tool to create ’new‘ games is the recombination of game mechanics from different games. Most games are themselves combinations of different game mechanics, e.g. random drawing, set collection, guessing, empathy and trade in „Happy Families“ / „Quartett“. Any of its mechanics could be exchanged or modified to generate a different game. For example changing the dice throw in „Pacheesi“ to drawing and playing from a set of cards with different moves and functions in „Sorry!“ turns the gameplay into something more tactical. In contrast, adding special-moves-cards to chess in „Tschach!“ gives the old game a more random, chaotic character.

More complex games rely on a set of interconnected elements affecting each other and thus provide for a complex gaming experience. Such game systems are created by starting with a small stock of elements, behaviours and connections (rules), followed by the addition of more elements in incremental little steps, with phases of playtesting and balancing the game. This is called ‚accretion and tuning‘. For example for a game of „BA study of educational sciences“, you could start with a ’student‘ (as a playing piece or a ’sim‘), ‚learning objectives‘ (ressource cards to be gained or skill-levels to be acquired) and a ‚time schedule‘ (the game board or schedules of lectures spread over three years). Then add complicating relations (required cards to move on or patterns of preconditions to be met), random antagonistic or supporting events (event cards, limited ressource cards), helpful or hindering coplayers (incentives for cooperation but also for competition), etc. etc. (See e.g. Sims‘ designer Chris Trottier’s text on systemic accretion an tuning).
The card game for pedagogues, „Tiebranimes“, is an example: It started out as „Quartett“ / „Happy Families“, and evolved into something more complex with action cards and different sized ‚families‘.

„Players enjoy complexity – especially the power that comes with powerful tools. What they do not like is “uninteresting decisions,” or games that leave them confused or with too many “easy” decisions – decisions where there is no learning to be had.“
– Kurt Squire, „Game Based Learning“

Existing board games or card games can be used as starting point for a systemic expansion by adding rules and/or playing material to the existing set. For example there are forms of „Sorry!“ (also known in variants „Pacheesi“, „Mensch Ärgere Dich Nicht!“, etc.) or Chess which depend on card expansions. „Carcassonne“ may be seen by its numerous expansion packs as another example of game design – or rather adding complexity to an existing game – by tuned accretion.