A hero (…) is a (mostly male) person with exceptional abilities or traits, driving him to exceptional feats, so called heroic deeds.

Don’t we all wish for us to make a difference for what we do, to achieve greatness, and to get apprehension for this? As well as artists, doctors, politicians, soldiers and fighters do teachers and mentors of all kind find their way into medial representation. Best known, probably, are teachers in mainstream movies. You can probably put up a set of teacher-archetypes as diverse as in any fairy-tale cast. Movies like the german „Feuerzangenbowle“ come to mind, where we get three clichees to compare: The beloved put disrespected kind one, the stern but fair one, or the authoritarian despised one. But there are also more recent movies, with archetypes of eastern (the ubermensch, the fool) and US-american cultural ilk (the victim, the physical fighter, the heartthrob)

Most impressive for teachers-to-be may be movies like „Dead Poets Society“, where the image of the teacher as hero is cultivated: A highly educated genius, witty, empathic, inventive, at odds with a bunch of dispirited, obedient, uninterested pupils who he (for it is nearly always a man) will inspire to love Shakespeare, history, latin, or knowledge, learning and autonomous thinking in general. „The Breakfast Club“ and it’s dispirited, prejudiced Richard Vernon may be an impressive subversion of this genre, though as utopic as the subverted topic itself.

Which teacher can stand up to such ideals?
Then there are the parodies – or are they? – like the droning Ben Stein in „Ferris Bueller’s day off“ with the appeal of a multiple choice test spoken by an automatic messenger service. Or the dystopic fears materialized in movies like „187“ or „The prinicipal“, where the (workable and working) answer – and question – is physical violence.

Wouldn’t this be a great idea for an educational game for teachers?

As in movies, games rely on a simplification of reality, of creating playable archetypes, amplifying some traits over omission of others: Caricatures, arechetypical exagerrations of the fears and hopes of what school(ing) may be.

Due to copyright infringements, the mentioned collection of teachers in mainstream movies has been deleted. A pity. Imagine a networked world, where quotes from any media could be drawn to illuminate concepts…

What still can be found – and probably will be hard to supress due to the popularity of the movies – is Ben Stein (once a speechwriter to Richard Nixon) in John Hughes‘ „Ferris Bueller’s Day off“ and Robin Williams in Peter Weir’s „Dead Poets Society“. Extremes of the teacher as medium… 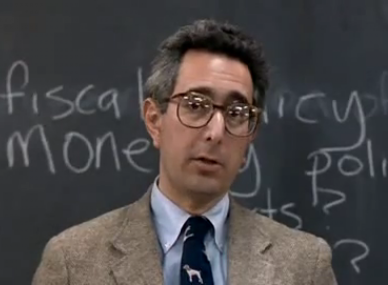 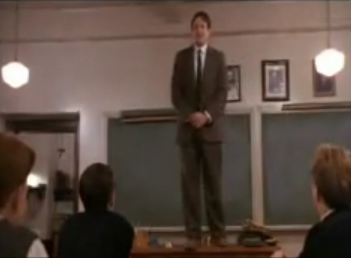